skip to main | skip to sidebar

The Society of Ancients is proud to announce that John Graham-Leigh's new wargaming booklet, Simple Campaigning, is now available for purchase from the Society's web store. 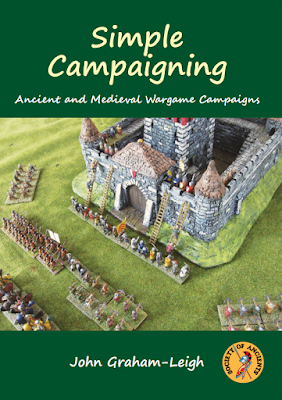 - Solo Campaigning. Solo mini-campaign set in the Hellenistic world, 200BC-100BC. Battles can be fought out on the tabletop solitaire or against other players.

- More Solo Campaigning: Angevin Empire. Solo campaign simulating the attempts of Henry II and his sons to hold and expand their empire. Includes a combat results table that can be consulted in place of tabletop battles if desired.

- Solo Campaigning Across the Steppes. Driven by the Mongol conquest but also including potential internecine warfare in Europe, the Near East and Asia. These battles can also be resolved by dice if desired.

- Millennium Campaign - Europe 1000-1100 AD. Another solo campaign on the grand scale, following the Normans, events in Germany, Spain, Eastern Europe and the East.

- Crisis of Rome Campaign. Set in the 3rd Century AD players take on the role of prefects within the Roman Empire, seeking fame, fortune, and the throne against a backdrop of internal intrigue and aggressive Barbarian incursions.

- The Wolf on the Fold. Players take turns to command the Assyrians over three centuries and, as Assyrian power wanes, switch to play their challengers until the Assyrian Empire collapses.

- The Calamitous Fourteenth Century 1350-1450. Includes the Hundred Years' War, German turmoil, the Golden Horde in Eastern Europe and events in the Balkans.

In all, the booklet features seven campaigns over 48 pages for a cost of only £7.50 (£6 for members). This should be a very useful addition to the wargamer's bookshelf.